Today’s introduction for you is a blockchain game called "Gods Unchained", which is a TCG game based on the Ethereum blockchain. It draws the experience from Hearthstone, Philia, MTG, etc.  to transforms this gameplay into a community-centric game.

Thanks to the blockchain technology, players can freely trade and sell their own cards, and fully have the ownership of the cards, which should be a great attraction for this type of game. At the same time, the rare cards have the upper limit of the release, which also greatly improves the real scarcity of the cards.

The style of the game is very beautiful compared to other blockchain games, and there are even some sense of superior, which can meet the needs of players with high requirements on the fineness of the picture.

The game's cards have six attributes. The traditional mode of play is similar to that of Hearthstone. At the same time, there are creative modes of chaos and big escape modes that can be modified by the basic game rules. It is not easy to get tired of playing with the game. 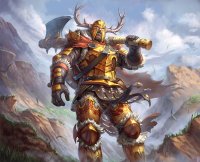