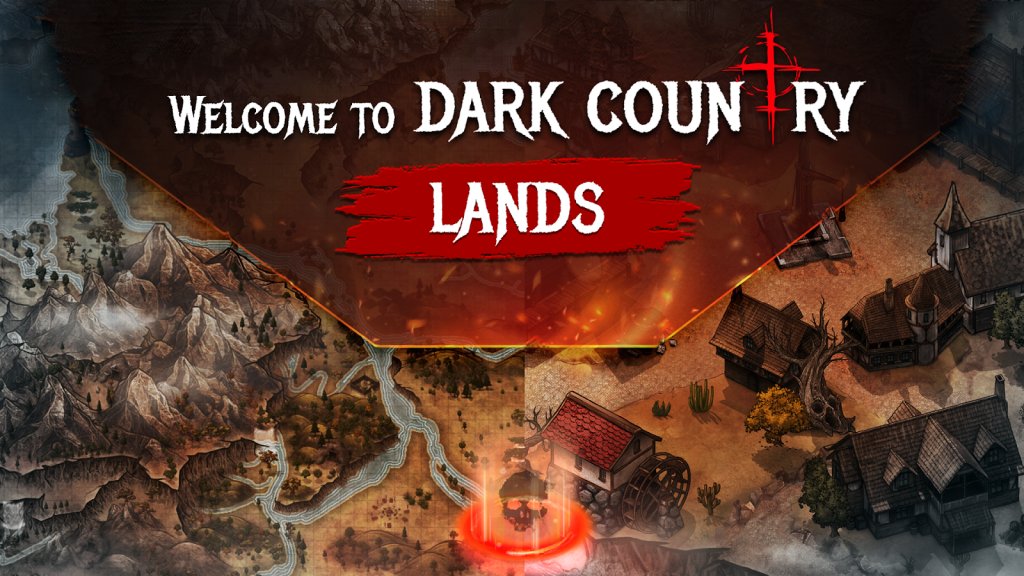 Dark Country has always been a unique project within the blockchain & NFT-games domain, standing out among other projects with the astonishing top-notch art, classic collectible card game mechanics and regular daily tournaments.

Just like a gamer never sleeps, neither does the developer. Today we’re happy to introduce you to the multichain lands NFTs, designed to play, collaborate, fight and farm across several worlds in the Dark Country Universe.

Today we’ll give you a quick sneak peek at the overall idea;) Let’s have a look!

? The World Map has a number of Continents that correspond to a certain blockchain. The more blockchains we’ll add to the Dark Country game, the more continents will be added to the Universe.

? The Continent Land is a certain blockchain-based piece of the world map that corresponds, for example, to the WAX, or FLOW blockchain and others. Continents contain Lands within their coordinates net.

? The Land Plot is the actual piece of the Continent that can be owned by a player — the Landlord. The piece of Land has its special coordinates within the Continent and, depending on a position related to the center of the map, will receive a certain priority to access resources. The closer to the central point of the land map — the better, of course. What are the Lands of Dark Country??

All lands have their own unique set of buildings that can be built and upgraded in order to improve the gameplay abilities of players and buff heroes for their exploration and farming.

Moreover, DC Lands are valuable assets that can be sold and traded as non-fungible tokens (NFTs) on the markets.

As the Dark Country is a multichain NFT-game, the DC World map is divided into a number of continents, each one designed for a different Blockchain. Every Continent has a 100x100 dimension with its own coordinates on the world map. 4000 out of total of 10000 land plots on a Continent will be available for user ownership and the rest will be used for special game activities.

Each land lies within a certain zone of the map: Common, Rare, Epic, Legendary and Mythical with a key Influence parameter. The influence parameter impacts your land’s farming capabilities and is calculated depending on the zone rarity and a position relative to the central point. 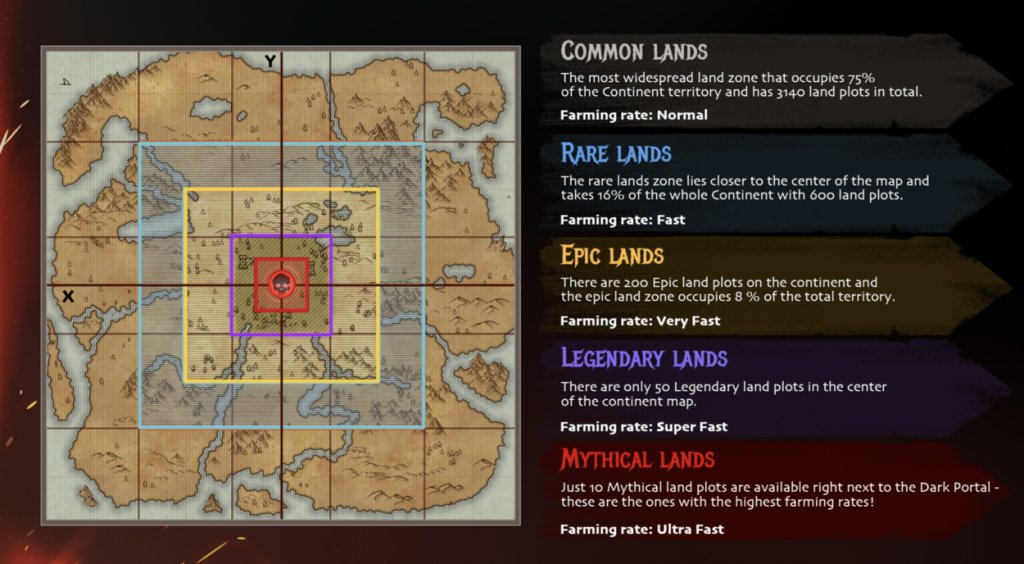 At the center of each Continent Map lies a Dark Portal — the [0;0] point, which is a prime source of in-game currency — the Shadow Dimes, and a place to go on quests and farming of other resources.

Every day Dark Portal generates a certain amount of Shadow Dimes and other resources that are distributed among the Landlords according to their Landlord’s zone farming rate and influence level.

Dark Country lands have a significant impact on the gameplay and are assets with the highest utility value in Dark Country Universe, creating a metagame layer that adds a big portion of new experience to gamers as well as becomes the main source for farming.

By being a landlord you obtain several options to take part in the Dark Country universe. Some are active, some are passive:

? Rent land to someone and get income

By earning resources from land, players can build and develop lands to unlock more buildings:

? Black Market — Place to buy and sell items (owner gets a commission)

Lands are points to enter the Dark Country universe with many activities on lands:

All these new features make our Dark Country Universe a real place to live in! 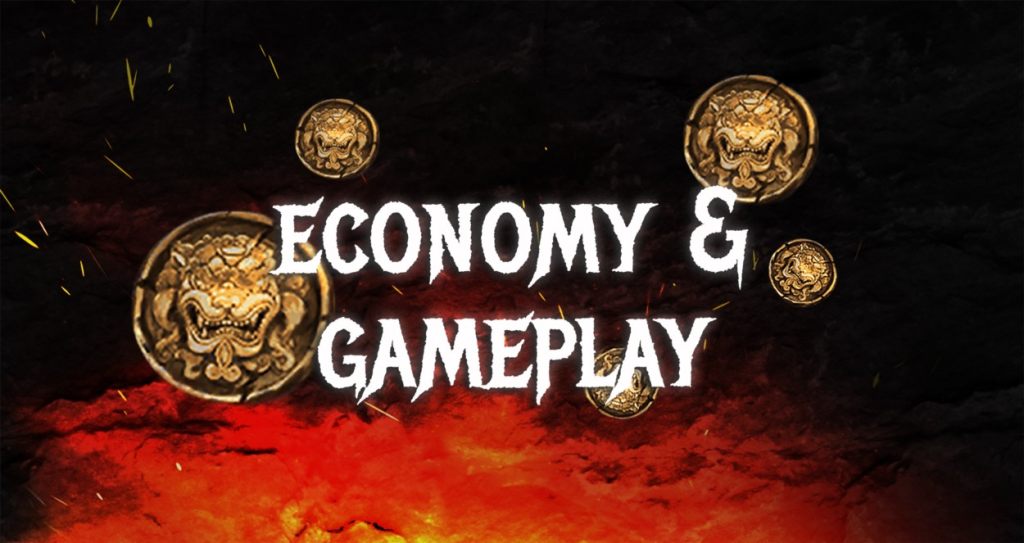 Whilst Dark Portal is the heart of Dark Country Universe and the source of the main resources, the Shadow Dimes in-game currency is the blood, nourishing the whole world’s gameplay.

The Shadow Dimes (SDM) is a transferable in-game currency that can be mined within Dark Country lands and is used for:

A daily supply amount of SDMs from Play 2 Earn pool will be distributed among all Landowners for mining activities depending on the Farming rate and Influence parameter of their land plots.

Additional SDMs will be transferred from the Future activities pool to Play2Earn pool alongside with the launch of these new activities (Arena, PvE and other). 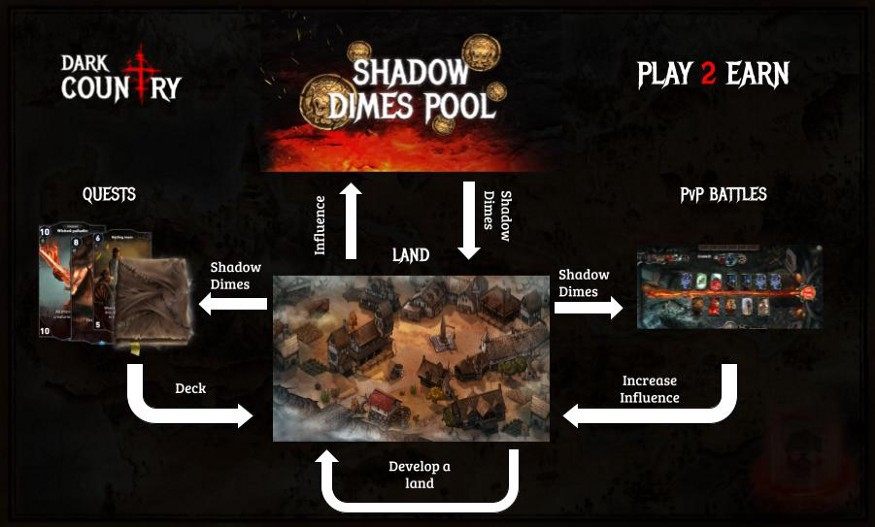 Introducing the Lands and new gameplay layer into Dark Сountry we integrate the existing card game mechanics to create an absolutely new Play2Earn experience both for players and Landlords:

For the Landlord — the main idea is to make your Land as attractive as possible — and engage as many users as possible. It can be done via hosting various activities, buildings constructions, upgrades — everything that will increase Land’s influence.

From the user-hero perspective, the gameplay will require a Land plot to start at (this can be yours or belong to somebody else) and a “Deck” with a minimum of 5 Dark Country cards.

Choose a land, make a deck with the best cards you have — and go trust your luck!

More to it — card game PvP battles will now “take place” on Lands, rewarding players and Landowners with Shadow Dimes for the core in-game activity.

Whatever you decide to be — a stand-alone hero on a quest, a Landlord or cards game master — you’ll get your tasty piece of pie anyway!

Let’s have a closer look at what kind of new gameplay experiences are being added to the game with the help of DC Lands.

Every weekend Dark Country owners can open the Portal to the center of the map within their land by paying Shadow Dimes. The expedition has 25 levels and increasing difficulty. Expeditions contain crafting reagents that are used to craft items via crafting buildings.

Crafting reagent has limited supply every week and the portal closes after all reagents are depleted or time expires. Every next level of the portal difficulty and entry price increases but the player can farm the same level multiple times. Every victory in the portal increases the influence of the land.

Passive PvE activities that are available through Dark Country lands. Players build decks around their heroes and send them on short quests and get rewarded with game resources and Shadow Dimes. Upon completion, a part of the resources will go to the owner of the current land as a commission. Number of available quests depends on the level of the tavern building and can be boosted by external locations on the world map.

To start a quest, the player has to pay with food that is generated in his home city. The amount of food for a quest depends on the quest length.

Players will be rewarded according to the Quest difficulty and cards that they commit to the quest with Shadow Dimes and game resources. Rewards will be dropped throughout the whole quest rather than upon completion. Part of the resources will stay with the landowners.

Some other Land features

? Card leasing: Landlord can build a hub that will allow all the players to lend or borrow cards.

? Card generation: Landlords will have an opportunity to make and apply changes to their existing cards (cost, attack, HP) and this way buff their hero’s deck for better quests performance. This option is also available for land-free users for a fee. 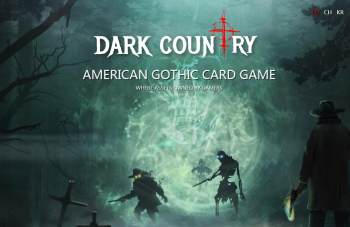