From finance to retail, blockchain integration is reaching industries worldwide. TRON has partnered with vSport Chain as the 2018 FIFA World Cup approaches and brings the first decentralized prediction market to the sports industry.

TRON, one of the world’s largest public blockchains, has allied with non-profit vSport Chain to develop the first World Cup Prediction Platform based on blockchain technology.

Described in the official press release, TRON and vSport have joined together to “share resources, collaborate on technical challenges, deliver premium content, build communities, and expand their reach.”

With TRON’s mainnet launch only a week away, the opportunity to introduce blockchain to an untapped market of over 3 billion football fans worldwide was a clear advantage.

TRON CEO, Justin Sun expressed on Twitter his excitement for the strategic collaboration: 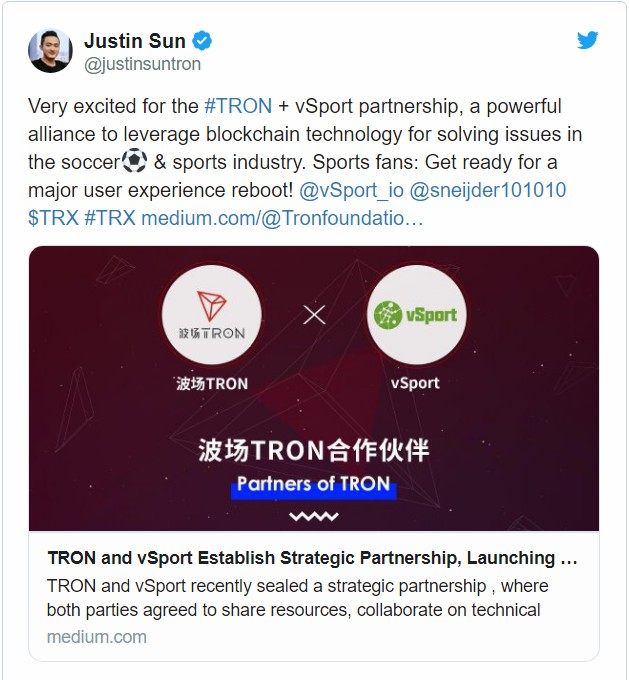 Based in Singapore, vSport Chain is a subsidiary project of the Sports Value Foundation, founded by Internet Entrepreneur, Qiang Bai, and famed football star, Wesley Sneijder.

vSport Chain is a blockchain-powered ecosystem dedicated to the sports industry and plans to include a range of features and applications, such as payment systems, copyright management functions, and prediction markets.

Forming key relationships with companies in smart wearables, World Cup distributors, and global payment systems, vSport is preparing to develop a full-fledged transaction platform in an effort to equalize value exchange within the global sports network.

Together, TRON and vSport aim to expand blockchain exposure and improve community value structures – starting by co-developing a “blockchain-based soccer results forecasting platform” that will be deployed on the TRON mainnet prior to the 2018 FIFA World Cup.